You are at:Home»Tips»How Not To Get Bogged Beach Driving

There’s nothing more glorious than cruising along a beach on a sunny day when the wind’s light, the water’s warm and the four-wheel drive’s just gliding across the sand. When everything’s going right, it almost feels like nothing and no one could stop you and it can be hard to imagine sand-driving ever being difficult. Truth is, it isn’t.

But even the most cursory glance at pages like I Got Bogged at Inskip Point or Instagram accounts like @_bogged_ show how often sand gets the better of tyres or technology. Problem is, sand’s inconsistent and sometimes it’s easy to drive on and sometimes it throws a curve ball. Doing these few things every time you drive on the beach will limit the embarrassing Instagram pictures you’re tagged in, though. In fact, do this and you’ll probably never need to unroll your snatch strap.

Beach Driving Tip One – Let some air out of your tyres. 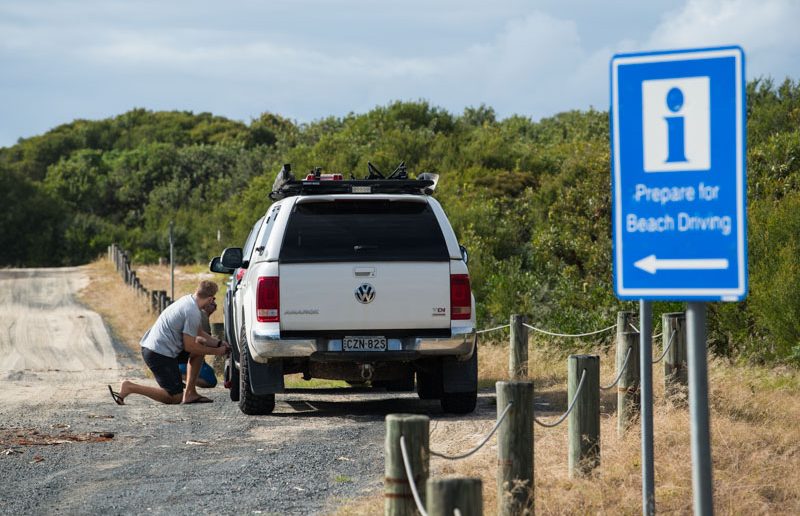 Actually, not just some air, let heaps out. If you are driving onto a beach with more than 20psi in the tyres, you probably don’t deserve to be recovered if or when you get bogged. There is literally no more cost-effective vehicle modification you can make to your vehicle than by simply deflating the tyres. We could talk all day about the best pressure to go to, but the best advice I’ve ever received is to keep letting air out until the 4WD no longer labours through the sand, and glides to a gentle stop when you take your foot of the accelerator, rather than lurches to one. On the super firm Aldinga Beach in Adelaide, that point will likely be around 30psi, but on Nine Mile (Blacksmiths Beach) on the NSW Central Coast, it’ll be closer to 15psi.

Beach Driving Tip Two – Let some air out of your tyres. 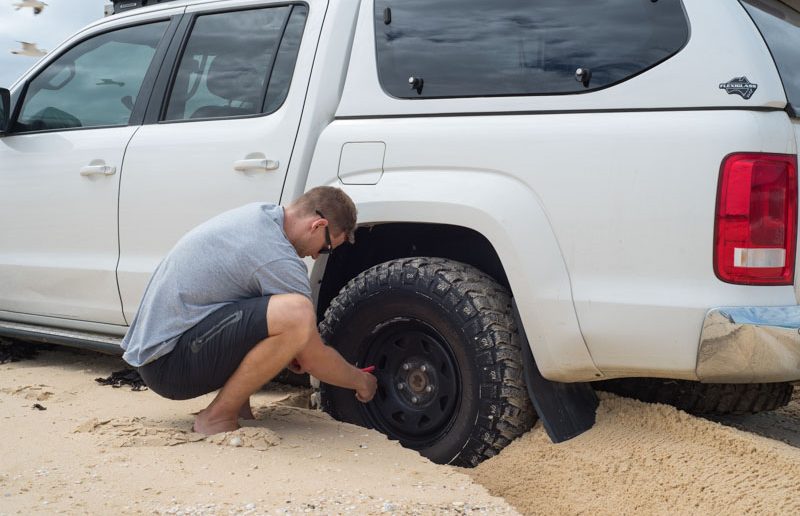 If you’ve done what I said above and just found you’ve got yourself bogged, let some more air out. As long as that tyre is still stuck to the rim, keep letting air out until you are not bogged. A 4WD with 1psi of air in the tyres, one tyre rolled off the bead but on its way out of the high-tide zone is far better than one with 14psi in the tyres and salt water licking at the side steps. You can always pump a tyre up.

Beach Driving Tip Three – If you need to turn around, turn downhill. 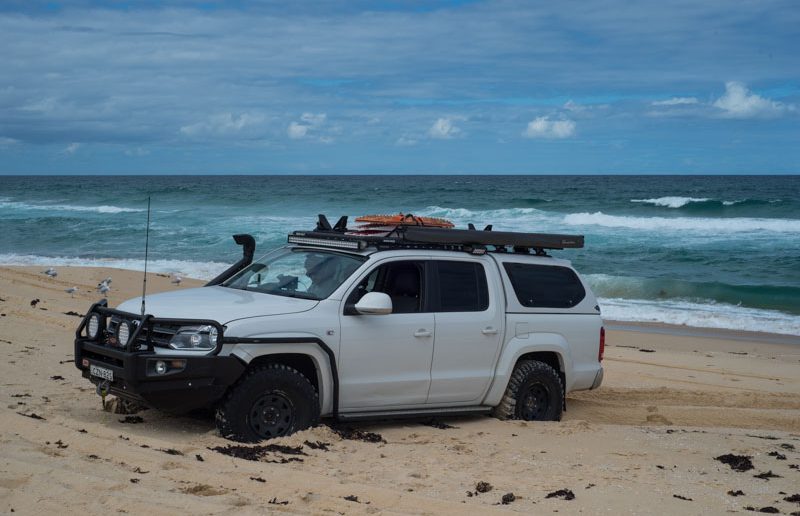 Driving on sand is heaps easier if you don’t have to also drive up a hill, so if you can avoid it, avoid it. If you need to turn around while you’re on the beach and go the other way, start on the high side and finish your turn on the low side, then use momentum to slowly climb back up the beach. If you start on the low-side you’ll likely be at your slowest on the steepest part of the turn and that’s when you’re most likely to get stuck.

Beach Driving Tip Four – If you don’t stop you can’t get bogged. 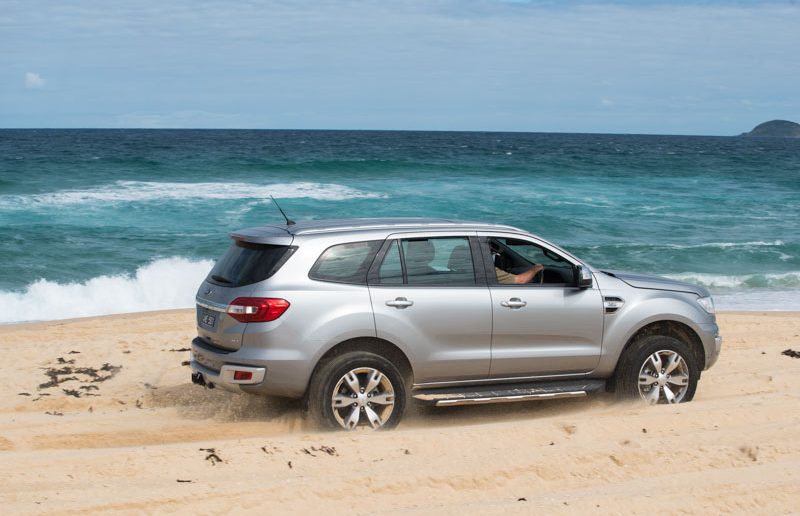 Only people who stop get bogged. When you’re driving along, always scan ahead for softer sand or steeper climbs or anything else that’ll make driving through sand harder. Use moderate amount of acceleration and momentum to cruise over softer sections and steeper climbs.

Beach Driving Tip Five – Stop before you get bogged. 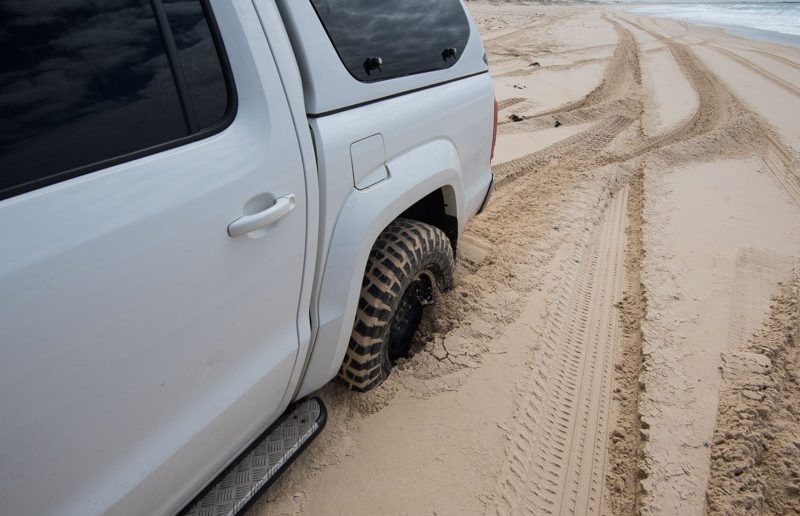 I’ve nearly always found that no matter how soft the sand, if it’s dry and I can keep the car inching forward, I’ll eventually find traction and crawl out. But if the sand is wet and closer to the ocean, I’ve found there’s a time to concede defeat and it’s usually seven seconds ago. The key to not getting bogged is realising that you’re about to be, and to stop trying not to be. If you can stop the car before the car is stopped, then that leaves you wiggle room to wiggle. Once you’ve stopped, get out and repeat tips one and two. Then reverse back a little until you feel your progress restricted, then drive forward a little until you feel the same. All going well, you should be able to repeat this as many times as it takes to bed a firm track of sand under the car which you can use to gain momentum on and drive out. I once did this for 15-minutes to build up a long enough track and avoid getting bogged, so be patient if you need to be. 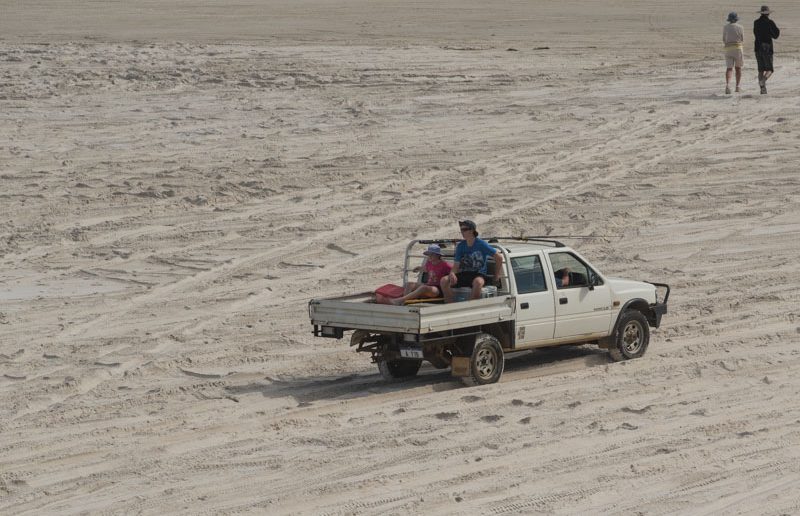 I used to be pretty lax about this one, until I had three passengers slam into the ceiling of my four-wheel drive then fall back to the rear bench seat and bend it beyond reasonable use after we hit an unexpected washout. I learnt the hard way, you don’t have to.

Think I’ve missed something? Add your thoughts in the comments.