If you ever come across me on a beach, there’s a good chance I don’t have as much recovery gear packed in my 4WD as you. It’s part laziness (can’t be bothered going to a store to replace old stuff) and partly over-confidence (haven’t had to use it in ages, anyway), and one-day that’ll bite me, I’m sure. But I recently got hold of a bright orange set of recovery tracks, but they’re not Maxtrax, like you might have thought first up.

They’re GoTreads, a folding recovery track that was invented by a bloke in America back in the 1970s because he was sick of getting stuck in the snow. And until very recently, he’d never even considered 4WDers might be interested in using the product to not get stuck in warmer places, too. I’ve actually been told that when the inventor came to Australia for the first time last year, he’d never actually seen a MaxTrax before.

GoTreads are made from a hard, high-strength polypropylene, with four hinged sections so they pack down to about 30cm long, and stretch to a little over a metre. Interestingly, they are longer and lighter than Maxtrax, plus they float.

And not everyone wants to, or has the capacity to, strap bright orange, metre-long pieces of plastic to their roof-racks or rear wheel-carriers. If you’re after a less audacious method of passive recovery, a product like GoTreads might be for you.

The concept is simple – when you’re stuck, jam the little ramp bit under your wheels and then slowly accelerate. The spinning wheels suck the treads underneath and then the weight of the wheel pushes them firm to the ground, creating a short ramp of traction to get you going again. And they work. If you’re stuck on flat ground, a single length of ramp should be enough to get you going (was for me, every time), although if you’re pointed up a hill or in really soft stuff, you might need a few more lengths, or have to relay them forward as you make progress. But eventually, you will be recovered.

Because they fold, they’re also decent wheel ramps for campervans, 4WDs with roof-top tents or caravans, and also because they fold, they pack away almost anywhere. In fact, in the two months that I’ve been testing them, they’ve been most useful as a levelling ramp for my caravan. Because they fold, there’s some control of how high they lift a wheel, and it’s now a product that has two jobs, rather than just the one. 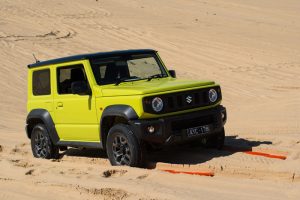 Sure you don’t get to show off how rugged you are, because they pack neatly out of sight in the  back of your 4WD, but they work, have more than one job and aren’t overly expensive for a moulded piece of plastic. Plus, they have a lifetime guarantee.