Ideal for surfers, free campers, fishos and nudists, Samurai Beach is a short strip of sand about five minutes from Nelsons Bay that’s easy to get to and, unlike the nearby Stockton Beach, needs no permit to drive on. South facing, the beach is part of a wide dune system that, like the nearby Stockton Beach, is constantly moving. It faces the predominant swells, so often has the biggest waves in the area, and has a large, open campsite at its northern end that’s only accessible by driving up the beach. The beach is also a nudist beach, so there’s a good chance you’ll come across a nude old bloke, and slim chance there’ll be someone good looking, sorry.

Driving conditions
The entrance to the beach is unsigned and easy to miss if you’re not looking for it, tucked as it is between Port Stephens Treescape and Middle Rock Holiday Resort, two caravan parks. The Samurai Beach Access Trail is narrow and sandy, but as it winds through the trees before the open dune system, is mostly firm. Watch for cars coming the other way, as this is a highly trafficked beach. The track is suitable for camper trailers, but larger off-road caravans might have trouble not scraping the sides.

Once in the open, the sand softens very quickly and the wide trough in the dune is often an amphitheater of bogged four-wheel drives and people hastily letting air out of their tyres. As this is such a short beach that people mostly come to for a surf, the track is rutted from so many 4WDs with too much air in their tyres using speed and revs to get through the soft stuff. Coming over the dune to the beach is the worst of it, though.

The short beach is not too hard in itself, as the sand is slightly firmer with more exposure to the ocean. It’s a  steep beach, and heading north there’s a large area that’s completely inundated during high tide, so getting too or from the campsite must be timed with the tides. The southern end of the beach is firm and flatter, with a rocky outcrop into the surf. It divides Samurai from the calmer One Mile Beach.

The northern end is softer and ends at a high, rocky headland and the soft track up into the campsite. I took two goes at this with a camper trailer on, although without it, I sailed easily over it.

Camping
The camping area at the northern end of the beach is wide and open, although sandy and with few absolute flat spots. There’s nothing here but a handful of rock rings for campfires (which aren’t officially allowed) and a sign letting you know what is and isn’t permissible. It’s quite a pretty spot, though, set behind the dunes, and it’s often quite empty considering those in vans can’t easily get here. Good news, there is mobile reception, so you can upload pictures to Instagram and Facebook. 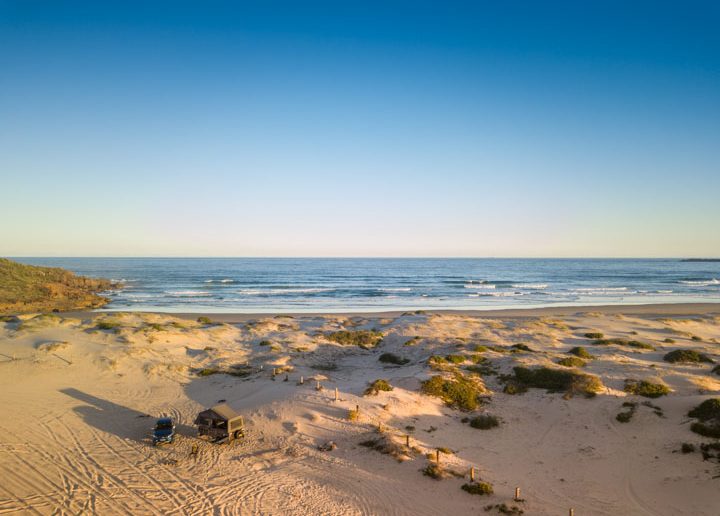 Fishing
To be honest, the surf was good so I didn’t bother with the fish. Fishing Monthly magazine reports that Middle Rocks is a hot spot for jewfish and luderick which like to hunt in the wash, while the beach is pretty good for the beach-fishing top three – whiting, bream and tailor.

Surfing
Both One Mile and Samurai Beach are popular surf spots in Nelson Bay and due to the curve of the beach, offers good conditions in most southerly swells to the north and more protection from really big swells further south. When I was there there was a good bank right out the front of the beach access, and a reasonable left-hander to the north. The beach is a local swell magnet, so is often a little bigger here than other beaches in the area.

Need to know
Distance – 1km
Camping – Yes, there is free camping at the north end of the beach.
Permits – None needed.
Speed Limit – None advised
Fishing – There’s probably bream amongst the rocks, whiting when its calmer and salmon and tailor in winter.
Surfing – Local swell magnet thats good in a south swell and off-shore in a north, north-west wind.
Boat Launch – Probably not a good idea.
Beach Difficulty – It’s hard to get on and off the beach, and there’s risk of being blocked in by the tide.
Access: From from Gan Gan Road, One Mile. 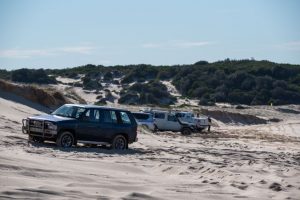 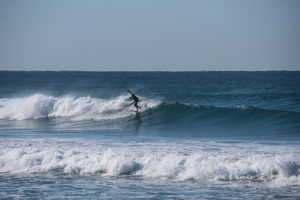 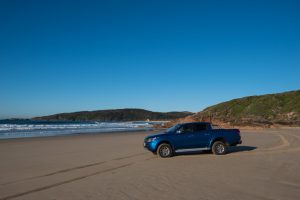 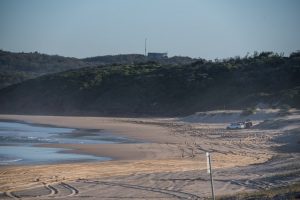 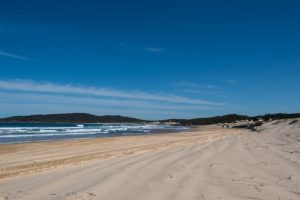 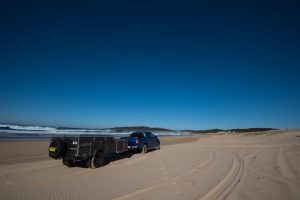